Glenferrie Primary School No 1508 is of architectural and historical significance to the State of Victoria. It is architecturally significant as a largely intact example of a late nineteenth and early twentieth century school complex and there are five buildings of heritage value: the original nineteenth century building, the Infants School, the caretaker’s cottage, the sloyd room and the shelter shed. The original building is architecturally significant as one of the best and most intact examples in Victoria of one of the large asymmetrical Gothic style schools built by the Education Department following the introduction of the 1872 Education Act. The 1881 Arts and Crafts style caretakers cottage (two rooms and a yard) as it is now a rare example of onsite accommodation provided for school employees. The Queen Anne style Infants School is significant as the earliest of this school type constructed. The sloyd room is significant as one of the few such structures now known to survive in the state. The shelter shed is possibly the only Federation period arched shelter shed remaining in the state.

It is historically significant as a reflection of the enormous increase in school enrolments in Victoria following the 1872 Education Acts and of the rapid growth of the population of Melbourne in the late nineteenth and early twentieth centuries, which required the establishment of many new schools and the continual expansion of existing schools.

In 1873 a letter was sent to the Minister of Instruction requesting a second school in Hawthorn. A deputation was sent to the Education Department and land for Glenferrie Primary School was purchased by the end of 1873 for $1188.00 and planning began for the new Hawthorn State School.

On 22nd February 1875 the new Hawthorn State School no. 1508 began operations in the Wesleyan Methodist Sunday School room on Burwood Road near John Street. Daniel Wright was the first Head Teacher of the 300 pupils initially enrolled. The building on the Manningtree road land, which included the bell tower, was completed in 1877 and was further extended twice in the first 10 years to accommodate the ever increasing number which by 1887 had grown to 1000.

The first shelter sheds were built in 1886 paid for with monies raised by the school, but collapsed four years later in a strong gale. In 1904 the Wattle Road block of land was bought and the infant building completed in 1907 giving the school a whole new focus.

Various renovations and improvements have been completed over the years, including sewerage in 1906 and the use of the Wattle Road building for R.A.A.F classes during World War 2. Over the years the school has been known as the Hawthorn School , Manningtree Road School , Central School and Glenferrie Primary School . Post primary classes ceased in the 1960s.

The bell that is housed (and working) in the bell tower originally required two boys to really ring it properly and when it turned over due to their exertions, they had to fetch the ladder and turn it back. During the last major renovations in 1997, the bell was restored to working order and is now rung on special occasions.

It is historically significant as a reflection of the enormous increase in school enrolments in Victoria following the 1872 Education Acts and of the rapid growth of the population of Melbourne in the late nineteenth and early twentieth centuries, which required the establishment of many new schools and the continual expansion of existing schools. 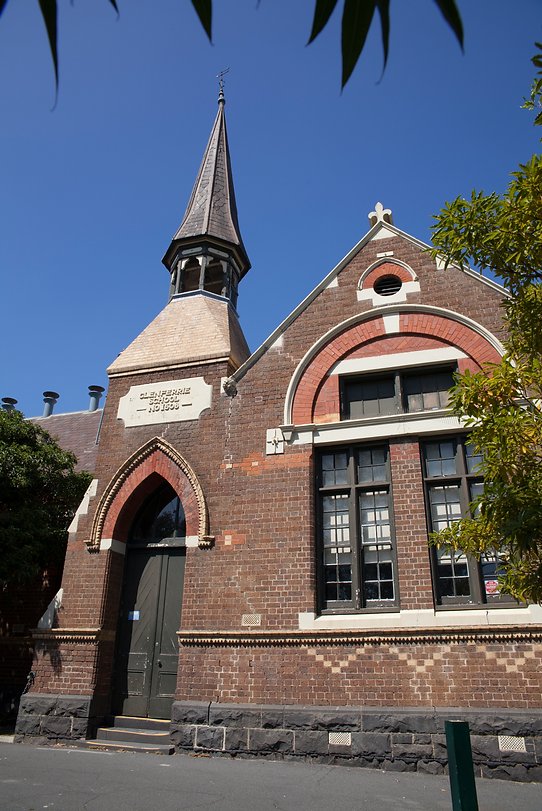 In 1975 Glenferrie celebrated its centenary and the school held a number of activities including a ‘historical day’ with many children dressing up in Victorian costumes.

Glenferrie Primary School has approximately 350 students enrolled and is very proud of the 27 countries these children represent – a reflection of the multicultural local community students come from.

In recent years, new buildings have been built expanding the both the indoor and outdoor play areas for students. These new buildings include an assembly and sports hall which also houses a before school and after care school building and an oval and playground which provides a focus point for the Manningtree Road end of the school.

Currently we are reinvigorating our grounds and new gardens, a nature-based playground, and a vegetable garden has been established. More gardens are planned to encourage students to appreciate our native landscape and the importance of the environment.

The house system of Slyth, Jona, Martin and Owen (each house name honouring a notable past student) continues today and students are allocated to a house when they enrol. Each Monday after assembly students meet in their houses and undertake activities together with the purpose of building a stronger community where each student feels connected to the school and each other.

Throughout the year, Glenferrie celebrates the diversity of its students by running various activities such as Footy Day, Harmony Day and Italian Day and the school is as vibrant today as it was when it was established in the 1800s.